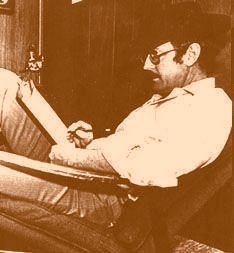 0:00 Introduction
1:12 Current projects
2:55 Writing Habits
4:33 Writing For Practice?
6:10 Writing nonfiction vs. Fiction
7:18 Hardest Book To Write? Easiest?
8:30 Tie Fast Country: TV & Getting Inspiration From Rural Life
12:10 Rereading Old stuff
13:00 Thoughts on Audio Books
16:00 Is it harder to write as you get older?
16:40 Thoughts about genre & collaboration working with editors
21:44 Writer and  Family Life
23:15 Reactions to "Wanderer Springs"
23:40 Is it important that fiction be accessible to an audience?
26:50 Books that Influenced Me while growing up. Small town libraries
28:00 Developing as a young writer. Father's influence.
31:20 Characteristics of Texas writing and writers
33:45 Traveling and seeing the world
34:20 Thoughts  about teaching students and how it changed my writing
35:20 Principles/Secrets of Writing
36:10 Tips for New Writers
37:30 Identifying with my characters; small town stories
40:00 Writers that Influence Me
Robert Flynn (or Robert L. Flynn)  is a Texas author born in  Chillicothe, Texas in 1932. In his novels he writes  about Texas traditions and myths, the clash between rural and city life, God and Christianity in a forlorn (and often violent) world. With his first book "North to Yesterday" he tackled the legends of the Texas cowboy and in his later works (Jade & Jade the Law, both set in early Texas) he continues writing in the Western genre, but with an eye towards understanding the nature of violence, justice, redemption and reconciliation.   Robert Flynn is the author of 17 books, including Jade: Outlaw, The Last Klick, and North to Yesterday, and a two-part documentary for ABC-TV as well as a fellow at the Texas Institute of Letters. He taught at Trinity University in San Antonio for 4 decades. Flynn is the recipient of a Lon Tinkle Lifetime Achievement Award, two Spur Awards from Western Writers of America, and two Wrangler Awards from the National Cowboy Hall of Fame. He lives in San Antonio, Texas.
QUOTE: "You can read any book on writing fiction for example, and they will tell you the same thing. Someone may say it in a different way that gives you better insight, but there are  no secrets in writing; it's just a matter of doing it."
Wikipedia page and author website
This interview was made in 2007 in San Antonio where Robert Flynn lives. Interviewer is Robert Nagle, editor of Personville Press.